Fresh vs. Frozen Vegetables: Which are better?

One of the biggest concerns when it comes to frozen vegetables is the nutritional content. Sure, we love the convenience of pre-washed, pre-cut vegetables but are we still getting the same nutrient-rich food if it was previously frozen? 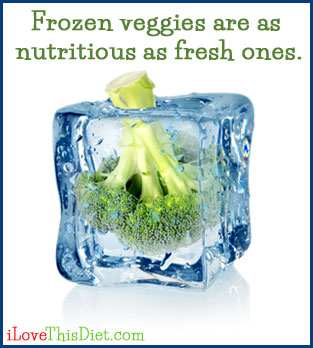 According to registered dietitian Andrea Morganstein, you’re better off buying your veggies frozen. “Don’t feel guilty that you are not buying fresh as frozen fruits and vegetables are picked and frozen at their nutritional peak. By the time fresh produce actually gets to your table, nutrients are lost due to the transit time.” This means the longer that celery has been sitting on the shelf, exposed to light and air, the less nutritious it is.
trending: HOW TO LOSE WEIGHT with FROZEN MEALS FROM YOUR SUPERMARKET
Flash Freezing
Frozen food companies flash freeze to preserve quality and flavor. And it seems freezing can preserve their nutrients too. After picking the veggies at the peak of their ripeness, flash freezing locks the food in a nutrient-rich state.
According to Colorado State University Extension, freezing vegetables involves blanching them beforehand either in a steam or hot water bath. “The reason is that heating slows or stops the enzyme action…If vegetables are not heated enough, the enzymes continue to be active during frozen storage and may cause the vegetables to toughen or develop off-flavors and colors.” (http://www.ext.colostate.edu/pubs/foodnut/09330.html)
Shipping
Fresh produce is usually picked before it is ripe and then shipped to the supermarkets. And, unfortunately, this prevents the veggies from fully developing their nutrient content.
Also, if the produce isn’t in season, there’s a high chance transporting it took longer than usual. Long shipping times expose produce to mold and fungi as well as degrade the nutrients and minerals.
Nutrient Content in Fresh vs. Frozen
Researchers of University of Western Sydney, Dr. Geoff Skurry and Dr. Andrew Rochford, tested levels of calcium, potassium, and vitamin C in both fresh and frozen vegetables. They concluded that there “was very little difference between fresh and frozen vegetables in the vitamins and mineral content.”
Their final recommendation? Just don’t store frozen produce for longer than 6 months as nutrients begin to break down significantly around this time.
So when your produce travels from the farm to your fork, it’s okay if it hits the freezer in between.
Irradiation
To avoid food from spoiling early, the FDA has approved irradiation on meat, poultry, fruits, and vegetables. Irradiation is a process by which food is exposed to radiant energy such as x-rays, electron beams, and gamma rays to kill bacteria, prevent ripening, and to prevent spoilage. Many foods bought at your supermarket have been irradiated.
The controversial aspect of irradiation was acknowledged by the FDA but in 1963 they deemed irradiation of food to be safe.
The FDA has approved Irradiated foods are supposed to be labeled as “treated with radiation” or “treated by irradiation,” however this regulation isn’t consistent for every food.
Canned Food
Thinking about canned food as an alternative to fresh or frozen? Watch out, as canned can be some of the worst food you can buy. Not only are salt and preservatives usually added, but harmful chemicals leach from the can into the food. Moreover, the canning process, which  uses high temperatures, denatures the food.
Buy what’s in season when it’s fresh and ripe. Anything not in season, go for your trusted freezer aisle.